The Catholic Church, one of the few trusted institutions in Congo, has determined that a leading opposition candidate won this week’s presidential elections, a senior Western official and a presidential adviser said on Friday, setting up a potential confrontation with the Congolese government.

The Kabila government also confirmed that the church had identified Mr. Fayulu as the winner. Kikaya Bin Karubi, a diplomatic adviser to the president, said in an interview on Friday that the governing coalition party was “aware” that the church had “chosen to publish the winning candidate as Martin Fayulu.”

Mr. Kikaya said the church was breaking constitutional and electoral laws and was looking to start a “popular revolt that it will end up being responsible for.”

The Democratic Republic of Congo’s electoral commission, the only body legally mandated to announce the election results, has not announced a winner and said this week that the counting had not been completed. The commission is seen by many Congolese as being close to Mr. Kabila, whose autocratic rule has spanned nearly two decades.

But a Catholic bishops’ group, the National Episcopal Conference of Congo, said it had deployed 40,000 observers to polling stations who had access to vote counts. The group said on Thursday that those vote counts showed an undisputed winner, though it stopped short of identifying the candidate, partly because it lacked the legal authority but also for fear of unleashing violence.

Given widespread concerns that Mr. Kabila is unlikely to accept a winner other than Mr. Shadary, “the Catholic Church is on collision course with the Congolese government,” said Jason Stearns, director of the Congo Research Group at New York University, which conducted the latest opinion surveys.

“The Catholic Church has raised the stakes, stating clearly that they will publish what they consider to be true results of the elections and will defy the government if necessary,” Mr. Stearns said.

President Trump said Friday night that he had sent around 80 troops to Gabon, within close reach of the Congo in case the election dispute made it necessary to evacuate Americans. In a letter to House Speaker Nancy Pelosi, he said the troops were deployed “to be in position to support the security of United States citizens, personnel, and diplomatic facilities in Kinshasa,” the capital.

Mr. Trump said the first troops to Gabon arrived on Wednesday “with appropriate combat equipment and supported by military aircraft.” Additional forces may deploy to Gabon, and later, to the Democratic Republic of Congo, if it becomes necessary, he said. The troops will remain in the region until the security situation becomes such that their presence is no longer needed, he said.

The Democratic Republic of Congo, a country of 80 million that is almost as big as Western Europe, has never had a transfer of power through the ballot box since independence from Belgium in 1960. Violent protests followed two previous elections, in 2006 and 2011, when Mr. Kabila was declared the winner in votes that critics dismissed as rigged.

Last year, Mr. Kabila stunned the nation by agreeing to step down after nearly 18 years in power, though he had already overstayed his constitutionally mandated two-term limit by two years. In an interview last month, however, he did not rule out returning to power in the future.

Mr. Stearns said there were any number of potential outcomes from the vote, and much would depend on the international community.

“There are many options for the Congolese government at the moment, ranging from repression to trying to co-opt part of the opposition, all the while banking on the relative apathy or complicity of foreign governments,” he said.

The latest developments came as the United Nations Security Council held closed-door meetings on Friday ahead of the official preliminary results, initially for release on Sunday but since delayed. The country’s electoral commission said on Wednesday, three days after the vote, that counting centers were still waiting for 80 percent of the tallies.

On Friday, the commission’s president, Corneille Nangaa, sent a letter to church officials condemning their actions. “The announcement of tendencies is of such a nature as to poison the population by preparing a revolt” that the church will be responsible for, he wrote.

The voting was also rocked by an Ebola outbreak and instability in the east, where two cities considered opposition strongholds were excluded from participating. Mr. Trump made no mention of the Ebola situation in his short letter to Ms. Pelosi.

The United States State Department on Thursday threatened sanctions against Congo unless accurate results were published. “Those who undermine the democratic process, threaten the peace, security or stability of the D.R.C., or benefit from corruption may find themselves not welcome in the United States and cut off from the U.S. financial system,” a statement read.

On Thursday, the Catholic bishops’ group said that the Congolese people had expressed a “clear choice at the ballot box.” The Rev. Donatien Nshole, its secretary general, urged the electoral commission to “publish in all responsibility the results of the election in respect of truth and justice.”

Many Congolese and other observers had interpreted Father Nshole’s words as a clear indication that Mr. Fayulu had overwhelmingly carried the vote.

Until he emerged as the primary opposition candidate, Mr. Fayulu was a relative unknown. He worked for Exxon in Africa in the 1980s and 1990s, before being elected to Parliament in 2006. With the backing of two of Mr. Kabila’s most prominent opponents — both barred from running for president — he was chosen last year as the candidate to confront Mr. Shadary.

In an interview last month, Mr. Kabila insisted that he would accept an opposition victory. But many observers have doubted that, given the extraordinary wealth that he and his entourage have amassed over the years.

A victory by Mr. Fayulu would hardly be a surprise, given the Congolese public’s frustration with Mr. Kabila, who has done little to lift his country out of poverty even though it is extraordinarily rich in natural resources. Congo is by far the world’s leading producer of cobalt, used in smartphones and electric cars. But very little of the nation’s wealth has trickled down to ordinary people, most of whom live on less than $1.25 a day.

Under Mr. Kabila’s rule, the government has either overseen or conducted serious human rights violations, cracking down on opponents and letting ethnic conflicts rage in parts of the country, causing thousands of deaths, according to international observers and human rights groups.

Mr. Shadary, a former interior minister, was recently placed on a sanctions list by the European Union for brutally suppressing anti-government protesters in 2017. In retaliation, the government last week threw the bloc’s envoy out of the country.

During the campaign, Mr. Shadary enjoyed overwhelming financial support and greater airtime on television and radio.

After the elections, the government shut down the internet and cut off access to social media in what a government official said was an effort to preserve public order after “fictitious results” were circulated on social media. The government on Thursday blocked the signals of Congo Canal, an opposition television station.

“We are not going to let a radio station throw petrol on the flames at a time when we are waiting for the compilation of the provisional results,” Lambert Mende, the government spokesman, told Agence France-Presse. 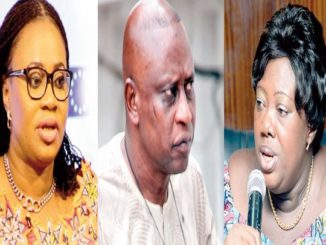 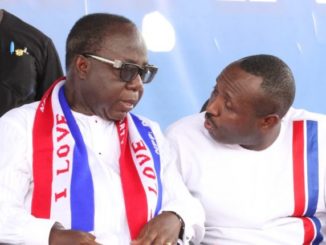 NPP inaugurates its Committees of the National Council