Sylvester Mensah has said that the issue of leadership in the National Democratic Congress is bigger than any of the perceived hopefuls and individual members of the party.

He further indicated in the interview with Adom FM that the party is older than all the hopefuls and ‘‘so one cannot equate the desire to lead the party to the ambition of any individual.’’

When quizzed by the host of the show, Kofi Adoma Nwanwani on whether the 2016 defeat of the NDC was caused by the leader of the party at the time, Mr. Mensah was quick to explain that “no leader can be absolved from defeat in general election.”

“Of course, the former leader, who’s the former president has accepted responsibility for the loss. But it is also important that every NDC member accepts a bit of the blame. We all contributed to our victory in 2012. It wasn’t an individual who won the 2012 election for us. It was our collective contributions, our collective sacrifices, the usefulness of our relationships at the time and the perceived mutuality of interest into the future that led to our victory. It was about the people’s appreciation of our manifesto or platform, of what we represented and the hope we gave them that gave us victory in 2012, and so if we lost in 2016 then something went wrong. It is important that all of us accept a bit of the blame.”

In response to a question on him stepping aside for former President Mahama to lead the party again into the 2020 election, he maintained that the vacant position of party flagbearer is no individual’s property.

He noted that some party members speak as though the position of party flagbearer belongs to one person with other people who contest, wanting to take what’s not theirs.

‘‘I disagree with that view. That view is completely uninformed. You can be my very good friend. We can be smiling around the same table. Why is it that you want to be a leader but I shouldn’t want to be a leader because you want to? I mean that is completely bankrupt! The issue is that our delegates must be given an opportunity to determine who leads them into 2020 general elections. Our party must determine who should lead the party. I believe that leadership of our party must be competitive. I believe that anybody who wants to lead our party must get the opportunity to go round this country, go round the branches, constituencies, and all the regions to interact with party members and convince them on why he or she should be given the mandate to lead”

When Mr. Mensah, who is acclaimed as a decisive leader by some members of the NDC was asked when he took the decision to contest the flabearership position, he drew an analogy between politics and the military and explained that if new officers are being commissioned into the military, they are admonished to aspire to rise to the position of Chief of Defense Staff but not to shoot the occupant in order to assume the role.

‘‘When one enters into politics, what one is required to do is to be helpful and useful to society or one’s community, constituency, region and country. To make this possible, one needs power over the allocation of resources. That power can be categorised as small, medium and big, and by the grace of God, my constituents bestowed on me that small power to lead them as MP.  I can say with all humility that I made myself useful to them. The time has come for me to aspire for the big influence which I will use to improve upon the living conditions of the people of Ghana’,’

Mr. Sylvester Mensah also added that calls from some party faithful across the country for him to lead the party into the 2020 elections also contributed to his decision to ‘apply for the job’, as he sees the opportunity as a ‘‘job to be done but not a position to be filled’’.

He observed that even though it is the right of everyone to aspire to such power over the allocation of resources. Ghanaians are God’s people and it is only God who can give that power to the one he deems fit to serve his people.

‘‘At this juncture, we are praying that the mandate we need to influence the course of development of the nation, God will put it into our hands.’’ 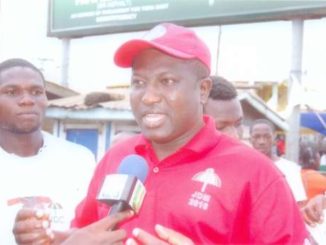 Mahama is on a wild goose chase-Moshake 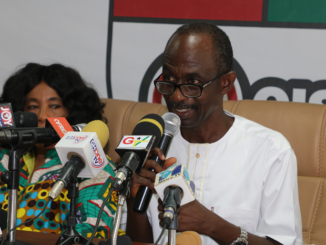