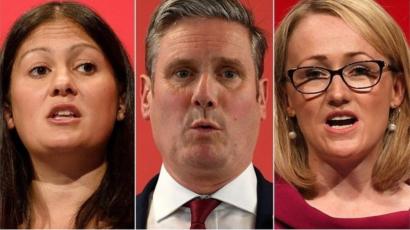 Getty Images. All three candidates have said the party must put the divisions of recent years behind it.

The winner of the three-month contest to succeed Jeremy Corbyn as Labour leader will be announced on Saturday.

Sir Keir Starmer is the favourite to be elected in a ballot of party members, trade unionists and other supporters.

The ex-director of public prosecutions, who became an MP in 2015, is up against fellow shadow cabinet member Rebecca Long-Bailey and Wigan MP Lisa Nandy.

The party will also choose a new deputy leader, with education spokeswoman Angela Rayner seen as the frontrunner.

The results of both elections are due to be announced at 10.45 BST.

Members will learn the outcome via e-mail and the media after a planned special conference to unveil the winner was cancelled due the coronavirus pandemic.

The candidates for leader have each been asked to record victory speeches, one of which will be released alongside details of how many votes each candidate received.

The process of choosing a new leader began in December after Labour lost its fourth general election in a row.

Mr Corbyn said he would stand down after the party secured its lowest number of seats since 1935.

Six candidates initially entered the contest but Clive Lewis, Jess Phillips and Emily Thornberry either dropped out or were eliminated before the final ballot got underway on 24 February.

Sir Keir, who served in Mr Corbyn’s top team for more than three years as shadow Brexit secretary, emerged early on as the frontrunner after securing the most backing from MPs and local Labour branches.

The lawyer, who led the Crown Prosecution Service before entering politics, argued that he was best equipped to unite different wings of the party after years of internal infighting.

All the candidates have said rooting out anti-Semitism in the party and reconnecting with “left-behind” voters in traditional heartlands, who backed Brexit, must be a priority if Labour is to rebuild trust and map a path back to power.

Among those eligible to cast their votes in the leadership and deputy leadership ballots were 114,000 new members who joined since the election.

Members of affiliated trades unions and other affiliated groups were also able to take part, as well as about 14,700 “registered supporters” who paid £25 to take part on a one-off basis.

Both ballots used a preferential system, with members ranking the candidates in order of preference. Is Ghana’s democracy on sale?