Scientists have invented a machine that converts Wi-Fi signals into electricity to power devices without the need for a battery.

The end result is a small two-dimensional device that is powered solely by Wi-Fi waves passing through it.

According to researchers, Wi-Fi could become a widespread power source thanks to a cutting-edge semiconductor that converts the signal into useful direct current.

Scroll down for video 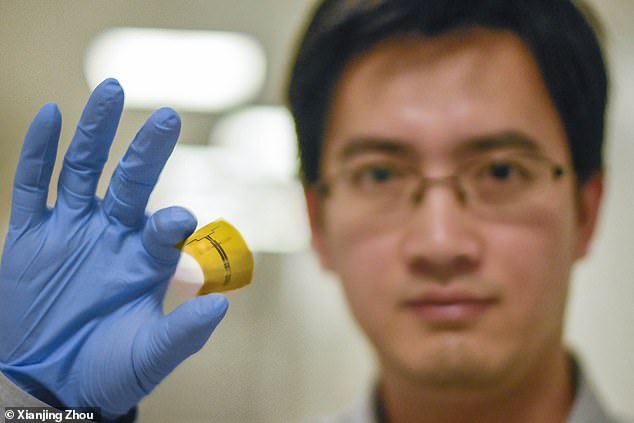 Postdoctoral fellow and first author of the study, Xu Zhang (pictured) managed to find a way to streamline this process and make the transition from AC Wi-Fi waves to DC for powering devices

A new type of rectenna captures Wi-Fi waves carrying the Wi-Fi and converts them to wireless energy using the semiconductor.

The team, from MIT, claim the device could power large-area electronics, wearables and even medical devices to beam data to doctors.

‘We have come up with a new way to power the electronics systems of the future – by harvesting Wi-Fi energy in a way that’s easily integrated in large areas – to bring intelligence to every object around us,’ said Professor Tomás Palacios, who co-authored the study.

The rectenna uses a radio-frequency antenna to capture electromagnetic waves carrying Wi-Fi in the form of AC waves.

This is then connected to a flexible and inexpensive two-dimensional semiconductor.

The AC Wi-Fi signal travels into the semiconductor and is converted into a DC voltage that could be used to power electronic circuits or recharge batteries.

This conversion requires a piece of equipment known as a rectifier. Most traditional rectifiers are thick and inflexible.

Massachusetts institute of Technology (MIT) researchers used a super thin and malleable material known as molybdenum disulfide (MoS2), one of the thinnest semiconductors in the world, to surpass this limitation. 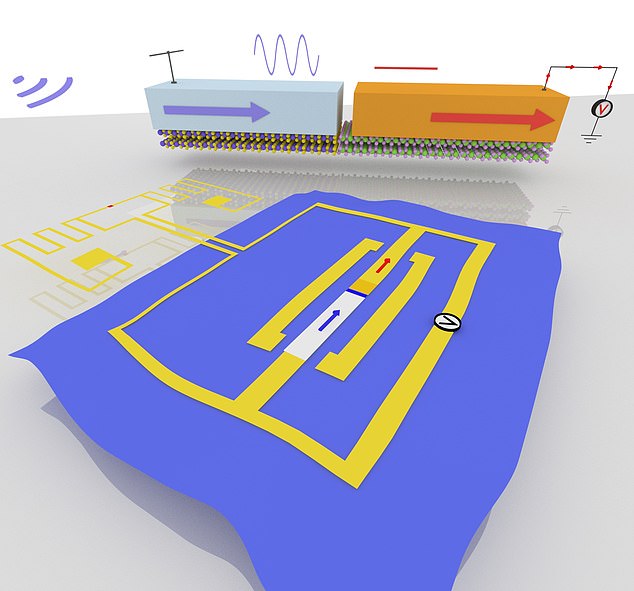 The device uses a radio-frequency antenna to capture electromagnetic waves carrying Wi-Fi in the form of AC waves. This is then connected to a flexible and inexpensive two-dimensional semiconductor and the output is electricity (pictured)

‘Such a design has allowed a fully flexible device that is fast enough to cover most of the radio-frequency bands used by our daily electronics, including Wi-Fi, Bluetooth, cellular LTE, and many others,’ postdoctoral fellow and first author of the study, Xu Zhang, said.

Dr Zhang managed to find a way to streamline this process and make the transition from AC to DC more efficient by decreasing capacitance in the system.

The researchers claim that the semiconductor is flexible and can be made in a ‘roll-to-roll process’ to cover very large areas, potentially walls or ceilings.

A device can turn Wi-Fi signals into energy that could be used to power electronics, without a battery. According to researchers, Wi-Fi could become a widespread source of power by using a two-dimensional semi-conductor to transfer it (stock) 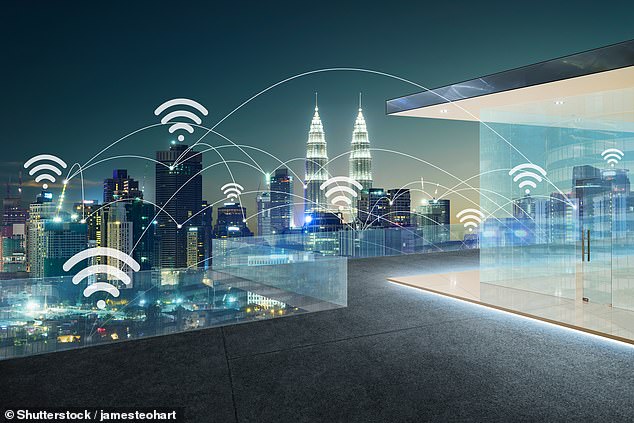 Researchers have made a new type of rectenna which captures waves carrying the Wi-Fi and converts them to wireless energy using the semiconductor. The researchers claim the device could power large-area electronics, wearables and even medical devices (stock)

Promising early applications for the proposed rectenna include powering flexible and wearable electronics, medical devices, and sensors for the ‘internet of things’,a  network of devices such as vehicles, and home appliances that contain electronics, software, actuators, and connectivity.

In experiments, the researchers’ device can produce about 40 microwatts of power when exposed to the typical power levels of Wi-Fi signals (around 150 microwatts).

That is sufficient power to light up a mobile display.

Another possible application is powering the data communications of implantable medical devices, says co-author Jesús Grajal, a researcher at the Technical University of Madrid.

For example, researchers are beginning to develop pills that can be swallowed by patients to stream health data back to a computer for diagnostics.

‘Ideally you don’t want to use batteries to power these systems, because if they leak lithium, the patient could die,’ Dr Grajal says.

‘It is much better to harvest energy from the environment to power up these small labs inside the body and communicate data to external computers.’