A number of Ghanaians who took part in a poll conducted by GhanaWeb for the month of June, 2020 say John DramaniMahama of the opposition NDC stands a chance of winning against Nana Addo Dankwa Akufo–Addo of the ruling NPP in the upcoming December 7, 2020 general elections.

However, results from the poll also revealed 15 votes (0.99%) indicated neither of the two candidates stood a chance of winning the elections.

The official and final results of this poll will be revealed on December, 6 2020, a day before the general elections.

Meanwhile, Ghanaians will on December 7, 2020 go to the polls to elect a President as part of four-year constitutional mandate in a general election.

The likely to be keen contest will see John Dramani Mahama, flagbearer of the National Democratic Congress contend against Nana Addo Dankwa Akufo-Addo, the current President of the Republic and soon to be acclaimed flagbearer for the New Patriotic Party.

NB: Results from this poll are for the month of June 2020 and is only representative of participants and therefore can not be generalised.

See preliminary results from the June 2020 poll below: 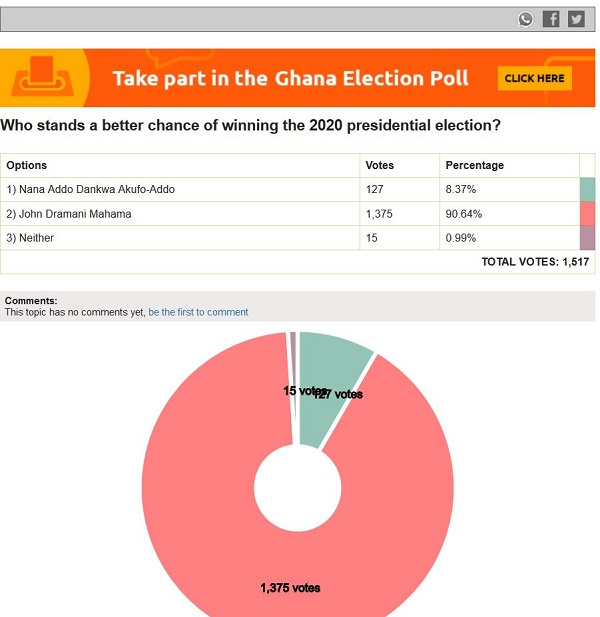 GhanaWeb launched its polls in May with the first question being: Should the EC go ahead with the new register?

This poll question gained 141,132 responses in 48 hours and over 2,000 people commented under the poll expressing divergent views about the Electoral Commission and the new voters’ register.

The poll seeks to enable GhanaWeb readers to predict the opinions of Ghanaians on issues and decisions that affect the country. Kanye West to run for president in the 2020 election