The acquittal on Tuesday of former president of the Ivory Coast, Laurent Gbagbo by the International Criminal Court (ICC) from criminal charges, sparked spontaneous jubilation by Ivorian refugees at the Ampain Refugee Camp in the Ellembelle District of the Western Region.

The camp of more than 3,500 Ivorian nationals who fled the violence that trailed the 2010 disputed elections, have since Tuesday seen some buoyant ‘victory’ marches with participants singing the ex-president’s name.

Celebrations
Activities at the camp came to a standstill in the immediate aftermath of the announcement of Gbagbo’s acquittal following what the court said was the failure by prosecutors to prove Gbagbo’s guilt for crimes against humanity, and adults and schoolchildren took to the streets to celebrate the declaration. 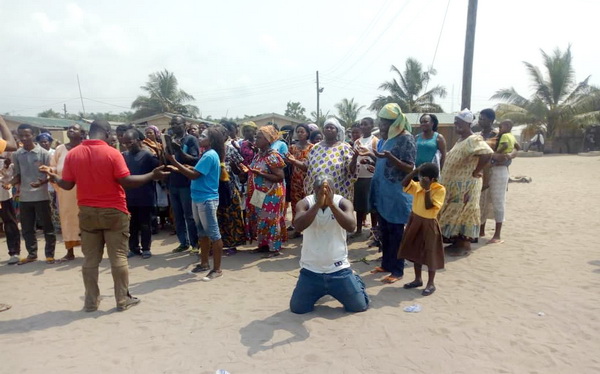 As the overjoyed Ivoiriens chanted songs and the name Mr Gbagbo, dancing round the camp, they greeting and hugged each other as others overwhelmed with joy, shed tears freely. A few of them dressed like the former president in what appeared a Gbagbo look-alike contest.

Some waved palm fronds in mimicking Jesus’ triumphant entry into Jerusalem, while others felt the need to pray and thank God for answered prayers.  The Ellembelle District Police Command has since the announcement provided personnel to protect and ensure that the celebrations do not degenerate.
–
Graphic Online